Climate Science & Psychic Predictions for the rest of this century

Climate Science & Psychic Predictions for the rest of this century 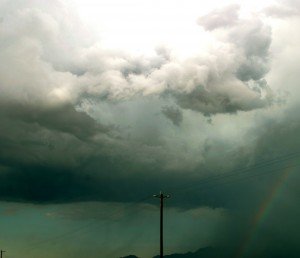 “We are on the top of Niagara Falls” in a canoe,” says  scientist Ovid Byron in  Barbara Kingsolver’s  novel,  Flight Behavior. He’s  talking to a reporter  about climate change. “We got here by drifting,” but we cannot turn around for a lazy paddle back…  We have,” he says,  “arrived at the point of an audible roar.”

Everyone is wondering how climate change will play out, and when.

We need both science and  intuition to prepare for these changes. Below I present  the  visions that my students and I have had in recent months, as well as the best of the  climatologists’ projections for sea level rise by the end of the century.

The limits of scientific projections   Scientists’ predictions tend towards conservatism and underestimation.   The International Panel on Climate Change, the Bible on climate predictions,  didn’t even include polar ice melt in their sea level rise estimates until last year because they didn’t feel they had enough of a handle on it.  This is where intuition and intuitive visions can be helpful in filling in the blanks.  Intuitive visions take into account the whole picture, including the factors that we have no historical data for.  But inner  visioning is hard to interpret correctly.   So we use both– the inner visions and the science, to  get a more complete picture.

And that  picture is daunting.    First, the warming trends are upward and accelerating, and like all  natural systems, they will follow an exponential, not linear, progression.  Exponential progressions start very small, but once they  reach a certain critical mass, they accelerate rapidly.

Scientists’ Projected  Sea Level Rise Depending on which study you read, climatologists estimate sea level rise will reach an average of three to six feet by century’s end.  In a  survey   that  is the most credible of the climatology studies because it combines scientific knowledge with a subjective intuitive element, ninety top climatologists gave their gut estimate for sea level rise by century’s end. Those estimates averaged six feet, which  could mean twenty-four  feet on the Atlantic seaboard. Of those ninety  scientists, a dozen of them  estimated ten to twenty feet for the global average, which, if correct, could mean forty to eighty feet along the Atlantic coast.

How do those estimates compare to our  intuitive visions of the future?

I’ve seen that the sea  will engulf  large parts of Florida,  and will also send people fleeing from New York City by  2100. Taken all together, our visions of the rest of this century fit Joanna Macy’s  characterization of  a “great unraveling” followed by a “Great Turning”  to a more sustainable world.

In 2013 I had a dream that I was high above the North Atlantic looking towards the North Pole. I could see the coastline from Maine to Labrador and further north. My eye was drawn to the sun beating down on the water and I became aware that the Arctic had mostly melted.  I saw that outback companies were leading extreme kayaking tours to the North Pole. I don’t know what year it was but sensed that I was seeing a future that was already in play, that it was going to unfold because it had already begun. Suddenly I saw these storms pinwheeling down from the area of Greenland. They came suddenly and without warning, making the boat tours dangerous. I saw the boats quickly turning inland for shelter.  Two weeks later in May 2013, the meters at the Kona, Hawaii meteorological center detected that atmospheric carbon had broken a new record of 400 parts per million.  This was the first time in over 3 million years that atmospheric carbon had reached this level.

Below are some of the visions my group and I have had for the future. Go here for an expanded updated list..

DETAILED YEAR BY YEAR VISIONS:  go here for an expanded updated list. Note that these early predictions are warnings, rather than absolutely going to happen.  They are the future as of the time we did the reading. Hopefully people take steps to avoid such a dire future.

2051: Black cloud around the U.S. Capitol, as if the U.S. central government is disconnected  from the rest of the country.

2100: Large parts of Florida are flooded, becoming  a popular place for sailboating.