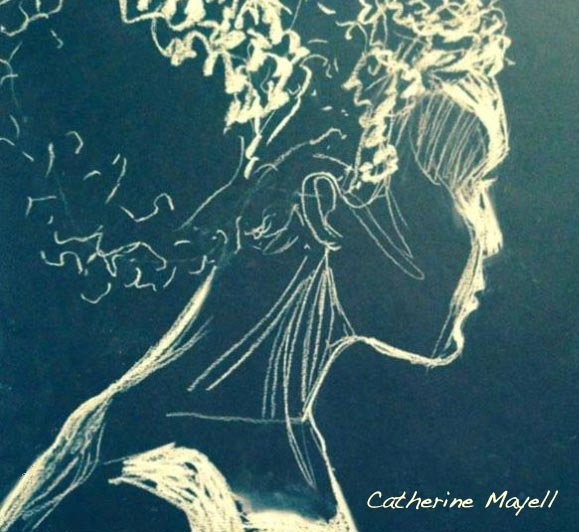 Most of us don”t bother to check out what we”re seeing when we close our eyes because we think it”s just going to be a bunch of static or we think that whatever appears doesn”t matter.

That”s what I used to think until I started  looking  at what popped up when I closed my eyes. It definitely wasn”t static and it did matter.

There were images, and they had meaning, and if I paid attention to them, they actually gave me useful information, information that I couldn”t get with my eyes open.

I”m not the first to find treasure behind closed eyes. The Ancient Greeks in their wisdom created a blind prophet named Tiresias who was famous for clairvoyance, (which literally means clear seeing and is defined as being able to see things that are hidden to the eye).

Tiresias” blindness goes to the point that when you look  with closed eyes (and Tiresias” eyes were permanently closed), you get the deepest truths. In first century play Oedipus Rex, Tiresias knew the truth when everyone else, including our hero, Oedipus, was clueless.

Contrary to what most people think about clairvoyance, science is discovering that seeing with inner eyes is not just some kind of magical thinking, but may actually be  a process we are already using but just not aware of.

For example, in a clever experiment, a Dutch neuroscientist named Beatrice de Gelder plotted brain activity of people who had one blind eye. She blocked their good eye and discovered they could see people”s facial expressions with their blind eye. Yes, you got that correctly, deGelder”s experiment showed that people were accurately sensing people”s facial expressions with their blind eye, although I should point out that they weren’t aware of it.

Equally interesting was what was going on in the brain when this inner seeing was happening. De Gelder found that some of the brain activity was actually in the brain”s visual cortex, the same place images we see with our good eyes are processed.

This discovery puts clairvoyance in a new light. Instead of hocus-pocus, clairvoyance may simply be an expanded  awareness of a process that we already  use.

De Gelder”s study is just one of hundreds focusing on clairvoyance. Daryl Bem, who the New York Times described as one of the most respected social psychologists of his generation, published a ten year study  showing that ordinary people are not only telepathic but able to sense the future. Naturally the study was panned by the mainstream press because there”s a long-standing taboo in mainstream reporting  on anything related to extrasensory perception.

But, as science is beginning to show, this capacity is not supernatural. It”s biology.

I discovered clairvoyance  for myself years ago when I first began practicing meditation. I was sitting eyes closed in a meditation class when I suddenly got a vision of a 12 week old fetus floating in one of the student”s wombs. “Wow!” I said, without thinking, “I see you”ve got a baby in there!” It was true and although shocked, she admitted it. But she”d been keeping it a secret. I”ve since learned to keep my visions to myself unless asked.

After that first inner vision, I was hooked.

I thought, “THIS CHANGES EVERYTHING!”

At the time, I was graduating from the Harvard School of Public Health. I had been a prime candidate for an illustrious public health career. But I threw it all away to get really good at seeing profound visions of people”s lives. And to use this ability to help people see inside themselves. And to be able to predict climate change better than the Intergovernmental Panel on Climate Change.

I wanted to expand the visual capacity of my brain, and I wanted to understand how it was possible that humans could do this. I also wanted to teach others about it.

The hundreds of accurate predictions on my website all came from inner visioning. The insights I get on clients” lives when I give private readings also come when my eyes are closed.

In the right hands, it”s a worthy profession.