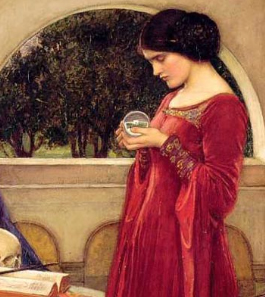 In the last post, I showed you how to see inner visions by closing your eyes. In this post, I’m going to show you how to get inner visions with your eyes open.  It also happens to be the easiest way to get psychic insight.

Why do most psychics use visual props to do their readings?  I’m talking about tarot cards, crystal balls, tea leaves, and coffee grounds.  The answer is that  people are  accustomed    to using our eyes to look outwardly at things  rather than to look inwardly.

Here’s  the revelation that  most  psychics know:  even when your eyes are open, you are seeing inner visions.

Most  of the time that we are looking around at things out there in the world,  you don’t realize that you  are actually seeing much more than what you  think you  are seeing.

You  are seeing inwardly as well.

While inner visioning with the eyes closed, can take a little  getting used to, when I show people how to stare at a tarot card to read another person, most can get a psychic insight the first try.

It works like the Rorschach  where a psychologist asks a patient to look at a bunch of ink blots on paper  and tell her what he sees.  The mind  wants to make sense of  these random blots,  so the patient  sees whatever is already on his mind.  If the patient sees blood and dead body parts, well, let’s hope the psychiatrist gets that there’s something dark going on in the patient’s mind. If he sees flowers and children dancing in the sun,  that’s a wholly different sensibility.

So psychology has known for decades that gazing at an image reveals as much about the  gazer as  the image.

What psychologists have missed but fortune tellers have always known is that if you gaze at an image while asking for insight about another person, you will see what is going on with that other person.   In fact, everything you think, feel, and see both inwardly and outwardly will be through the lens of the person you are reading.

Ask a question like, “What does my boyfriend think of me?”   Gaze at an image,  and, bam, the image will shift in your mind.  You will be seeing the image through the lens of your boyfriend.

Staring at a picture activates the intuitive side of the brain. The more abstract the picture, the more your brain will create meaning from it. That”s why impressionist paintings caused such a sensation when they came on the art scene. The paintings act as a stimulus for the viewers, who create their own impression while gazing at them.