Who is the real Nikki Haley beneath the image she is trying to Project?

@lovendures, she's showing she hasn't a clue about history. That flag was never the confederate flag. While most here in the south deny that the Civil War was about slavery-which it was ( I read all the articles of secession) , the flag in question was never the 'Confederate Flag'.  What we've come to know as the Stars & Bars was actually the flag of Lee's regiment, and was in the corner of two of the three official Confederate Flags. The Virginia regimental battle flag was square. The rectangular version of the flag as we know it didn't come to being until the late 1890's and early part of the 1900's when the 50th anniversary of the battle of Gettysburg used the flag and it was then adopted by the KKK around 1915 after a few early movies used the flag in film.

Here is the video of the woman who took down the traitor flag.  Her name is Bree Newsome, not N. Haley

Seriously?  Wow.  Thanks for that information.  I had no idea.

Seriously?  Wow.  Thanks for that information.  I had no idea.

Yep. Seriously. Battle flags were used to identify a regiment on the field. Commanders could look and see which regiments -identifiable because of their battle (regimental) flags. The Southern Cross was from the N. Virginia regiment-Lee's regiment. Tho there was a very similar one from TN (or KY-I don't remember right now).  The three official Confederate Flags looked like this: 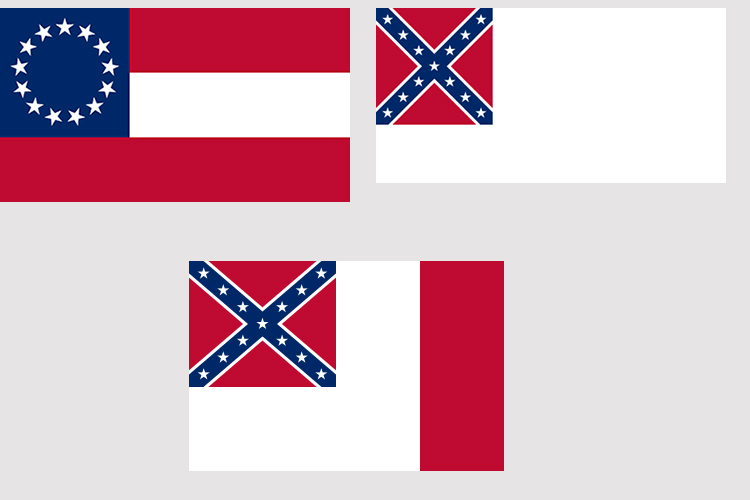 The first was changed because it was confused with the US flag on the field.  The second was confused with a surrender flag when there was no wind, which is why there were three official flags in four years. The N. VA battle flag was in many of the pictures of Lee since it represented his regiment, which is why it was mistaken by filmmakers and event planners years later. The rectangular version that came decades after the war has always been primarily associated with bigotry (or inadequate knowledge or research as in Gone With The Wind)-not with service to the Confederacy.

Your intuition is exactly right about Haley, Jeanne. Let's hope she never gains any real power.

There's an excellent 2-minute video on Youtube that explains how the Confederate flag evolved over the course of the Civil War: