So putting together the latest hits here, with thanks for finding them. We have now found 8 visions (yes, 8, the sign of infinity) about the virus, made a far back as 2017.

February 25–Predictions we’ve had about the COVID Virus:

–I see a disease that takes the attention away from power to survival.  I see a rapid shift, decline to survival. (Andrew Posey) Predicted 10/17 for 2020.

–I keep seeing China, I see the Chinese border, red, very well defined against Russia and North Korea which is grey. The border is there to keep people from coming in.(Bright Opal) Predicted 4/19/18 for 2020.

–Something big happens that’s designed (by Spirit) to slow us down.  (CDeanne)  Predicted 11.11.19 for 2020. New Coronavirus causing slow down in world commerce There can be no question that it will be a slow and painful process moving back to normalcy. .In the best of circumstances, this process will take six to nine months to see the way forward to a stable and commercially feasible reintroduction of business, confidence and renewed investment

–Iran in the news around this time. (Arianne)  Predicted June 2019 for March 2020.  Iran is one of three hotspots outside China causing concern that the virus could becoming a pandemic.

Baba, raindrop, Unk p and 1 people liked
ReplyQuote
Jeanne Mayell
(@jeanne-mayell)
Famed Member Admin
Joined: 4 years ago
Posts: 3895
02/27/2020 2:15 pm
@raindrop sent me this hit.Thank you, @raindrop!!!
In China in the mid-2020s: Beijing looks like a husk of itself. Streets are empty, Tiananmen Square is deserted except for a few people on bikes. The entrance to the Forbidden City is no longer decorated with a giant portrait of Mao Zedong. People have turned their backs on the communist regime? (Coyote)  11.11.19 for mid 2020's.  This vision has already happened.
Walking through Beijing's near-empty streets 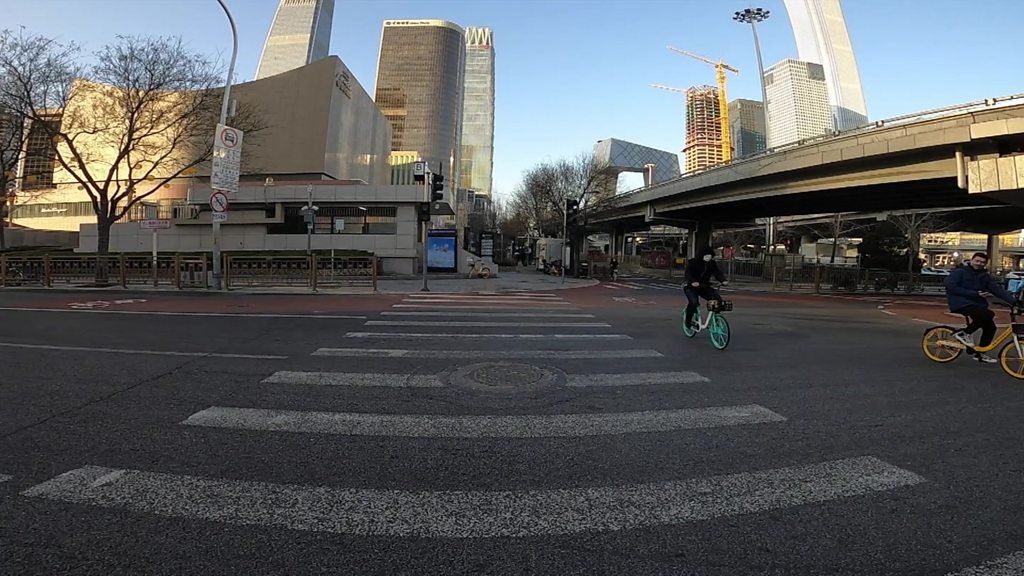 I had thought that Baba's vision was really about the COVID19 outbreak but she was exactly right that there was a poultry disease outbreak:

February 27––There is some kind of poultry plague in China. (Baba) Predicted June 2019 for March 2020. Highly pathogenic strain of bird flu reported in China.

I want to give a special thanks for @raindrop for flagging the hit about Bejing's empty streets from @Coyote.  It is a remarkable vision and we never would have seen it if she hadn't found it because it was for 2022.

At least 33 Turkish soldiers have died in a Syrian government attack in opposition-held north-western Syria, in a major escalation of the conflict.

The EU has warned the crisis could escalate further.

"There is a risk of sliding into a major open international military confrontation," EU foreign policy chief Josep Borrell tweeted.

Oh, wow. I never even thought the coronavirus could bring about this situation so soon. Because the only news I pay attention to are links being posted on this site, I too would have missed this hit.

Could this be the show of force against the US?

Wow!  One minute ago I heard Tom Steyer would be dropping out. He just did!!

Lovendures mentioned that there were a couple of predictions related to the Vatican for March 2020.

I wonder if this may be a possible hit.  Here's an except from a news story about the Vatican unsealing archives related to Pope Pius XII scheduled for this Monday, March 2:

The Vatican will throw open the archives of controversial wartime Pope Pius XII on March 2, allowing scholars to probe documents on the Pope’s knowledge and actions relating to the Holocaust.

Holocaust researchers will be among the first to gain access, including some from the United States Holocaust Memorial Museum.

Trying to catch up with all the hits:

War ship moving towards the China sea. Australia is on guard.  They are to New Zealand what the U.S. is to Canada.  War this spring. (Bright Opal) Predicted 11.11.19.

Thank you Jeanne good to know it eats links. Apologies for taking so long to respond.

The hit “Animals tell us what they are thinking. (Baba)” for all of 2020 I think could be a speech-language pathologist named Christina Hunger who goes by the online name of “Hunger for Words”. She has trained her dog to step on “word buttons” to communicate and the videos are actually pretty remarkable. She has a website but her most recent videos are on Instagram @hunger4words . It’s not like anything I’ve ever seen before and just watching the way she and her dog interact, it’s absolutely beautiful and I’m really amazed and excited. ❤️

@anumidium  links removed only in the first few posts.  Thanks for helping us with hits. I watched the video and it was just so wonderful.

@lenor Thanks for finding the hit.  As for purging disloyal employees -- that is exactly the reason for the rule that civil service employees can't easily be fired --- so that some criminal totalitarian dictator couldn't sweep into office and demand that everyone obey him.

Sean just posted these hits in the comments section of the Main Prediction Page.

1. The financial system is being torn up. (Karen) Predicted June 6, 2019. Covid 19 & future viral outbreaks will now & forever need to be factored in economic forecasting & projections. Of course this will include other complications such as global weather pattern changes & other things we haven't yet taken into account & will need to real soon.

2. There is disruption in the monetary system. (Karen) Predicted June 6, 2019. I saw something yesterday that Trump wants interest rates lowered to spur higher economic growth, but with ZIRP since 2008 that prospect appears remote. Look towards Japan to see how ZIRP turned out.

3. Economic problems for America. (Jana) Predicted June 6, 2019. This one is a bit of a wild card as we don't know how Covid 19 will actually effect economics going forward beyond the initial response from Wall Street that we can see at the moment.

It'll be fun to see whether what the fiction book says matches up with what the actual Vatican archives about Pope Pius and the holocaust being released tomorrow show.  Let us know!

I was looking at the predictions list for something else, but meantime found this from the 11-11-20 Predict the future night.

Two Mexican entrepreneurs have been nominated for an environmental award for creating a vegan faux leather. From a story on the last day of February.

I can’t believe I didn’t recognize this as a hit Animals tell us what they are thinking. (Baba)”until I was listening to one of the animal communicators speak. This is a 5 day online event featuring global leaders in animal communication & healing for people like me who have longed to hear and talk to animals. Maybe after this summit with participants from around the world, there will be many more of us able to clearly and confidently understand what animals are saying to us:-) ❤️

This is most definitely a hit for March 2020 - We are waking up to pretty horrible damage here in Nashville from a tornado that cut through parts of Downtown and East Nashville.

Trump Put Mike Pence In Charge Of The Coronavirus Response. Public Health Experts Aren't Having It.

I think this prediction may be multilayered. It is very interesting.

Hemingway called his style the iceberg theory: the facts float above water; the supporting structure and symbolism operate out of sight. Truth lurks beneath a story, which, as Global Warming, is becoming more and more evident as the iceberg of the Republican blockage melts in the heat.

Howard Schultz, who built the Starbucks brand and inspired customer trust, one store at a time through patience and discipline, also considered a presidential bid. Perhaps this relates to the wisdom of grass roots campaigning over the big moneyed approach.

I think this has to do with Trump’s insisting he is right despite evidence to the contrary, silencing and penalizing those, particularly scientists and journalists, who dare contradict his authority. He believes he is the center of the universe and has the backing of believers. Eventually, although perhaps not at the trial, the evidentiary truth will be accepted and the Republican party and their patrons will be forced to admit to their willful ignorance and apologize.

Background: In February-March 1615, a Dominican friar filed a written complaint against Galileo, and another one testified in person in front of the Roman Inquisition. They accused him of heresy for believing in the earth’s motion, which contradicted Scripture, e.g., the miracle in Joshua 10:12-13.

On June 22, 1633, the Church handed down the following order: “We pronounce, judge, and declare, that you, the said Galileo… have rendered yourself vehemently suspected by this Holy Office of heresy, that is, of having believed and held the doctrine (which is false and contrary to the Holy and Divine Scriptures) that the sun is the center of the world, and that it does not move from east to west, and that the earth does move, and is not the center of the world.”

“We order that by a public edict the book of Dialogues of Galileo Galilei be prohibited, and We condemn thee to the prison of this Holy Office during Our will and pleasure; and as a salutary penance We enjoin on thee that for the space of three years thou shalt recite once a week the Seven Penitential Psalms.”

Galileo agreed not to teach the heresy anymore and spent the rest of his life under house arrest. It took more than 300 years for the Church to admit that Galileo was right and to clear his name of heresy.

Much thanks to @george for this find and the explanation.  @George posted it quite a while ago in the Timeline Prediction thread for 11.11.19 Predictions 2020.  I only noticed it now.  Nice  job, @george!  Please come back!

@jeanne-mayell yes - most definitely! I posted that above too. The destruction here is just surreal. The silver lining in all of this is that it definitely reminds me what a wonderful community this is - and that all can unite when it really matters.

Vestralux also has a hit with mudslides in the Northwest.  Mudslides blocked the road to Paradise, Washington.

Bluebelle does it again. 🙂

Biden surges in the polls.  Anything can happen in the primaries. (Bluebelle)

Bluebelle does it again. 🙂 (Jeanne Mayell)

@bluebelle, you continue to nail it.  That is pretty exciting!

Yes, anything can happen in the primaries.